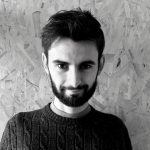 Andrea Ronzino is an Architect graduated at Politecnico di Torino, where he received his M.Sc. Magna cum Laude (2013). In 2014 his thesis was awarded the ‘Marcella Casali Prize’ as best final dissertation in History and Theory of Contemporary Architecture focusing on restoration of Industrial Heritage.
He is Ph.D. student in Architecture. History and Design and his research attempts to survey in detail the history and narrations of the Robin Hood Gardens Estate (London, 1972) outlining the general field of the conflicts arisen by the preservation/demolition issue. The main interpretative key the study wants to pursue is the narrative of a mutation of a “properly British aesthetic”, throughout the reception (or rejection) of a specific kind of modernity.
Andrea is Teaching Assistant in History of Architecture and Architectural Design from 2014 at the PoliTO and in a.y. 2016/2017 he has contributed to the organization of the International Excellence Course ‘Architecture, Media and Public Opinion’, coordinated by prof. Michela Rosso.