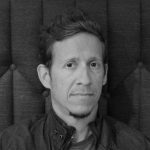 Research: “The Quest for Meaning – A Situational Analysis of the Modell Steiermark” / link to page→

Daniel studied architecture, urban planning and photography in Innsbruck, Vienna and Turin. Diploma in 2010 with a social-space analysis of public spaces in Turin.

Since 2013 he holds a position as lecturer in architectural theory and photography at Regensburg University of Technology.

His PhD thesis will discuss the impacts of the politicization of architecture from the 1960s onwards and the reorientation or rather the shift of architect’s role during that period.