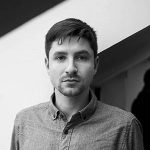 Emanuele Protti graduated at the Polytechnic of Turin after after studying in Barcelona and Sao Paulo. Now he is pursuing a Ph.D. in Architecture.History and Design. From 2013, his research focuses on how new urban manufacturing is able to convey transformations inside Post-industrial cities and about the changes of values inside the relations between Production and the City through economic, social and urban analysis. From 2014 he had the possibility to work at different scales from urban planning to industrial design and be part of different academic activities, workshop, and conferences.