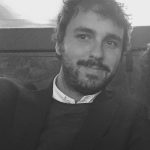 Fabio Marino (Palermo 1988) is a PhD candidate at Polytechnic of Turin since 2014. He received the M.Sc. in Architecture from Polytechnic of Milan in 2014. He also attended an International Student Exchange Program at FADU/Faculty of Architecture, Design and Urbanism in Buenos Aires between 2011 and 2012. At the end of this period he decided to spend one more year in Argentina doing researches for his M.Sc. thesis. This work focuses on the activity of Enrico Tedeschi, a largely unknown figure to the Italian historiography. The cultural and professional migrations of Italian architects in Latin America at the end of the World War II is one of Fabio’s main interests. Along the same line, his doctoral thesis deals with the exchange program of students and architects from the Faculty of Architecture of Rome and the School of Architecture of the Columbia University of New York during the 30s.